Boris is at my house, and has been hunting for buried treasure.

Sadly the most that he could find was a particularly large cache of cobwebs behind my sofa. He came out after an exploratory sniffing and grunting session covered in them and stared expectantly at his master and me.

I can’t stop smiling while he’s around and my tendency to start patting my knees and talking nonsense to him remains undiminished.

Boris for his part has no tail to wag, but he tells me with his eyes that he understands everything I say and acknowledges that he is in fact a good boy, and that for some time, yes, he HAS known this. He needs no confirmation.

Watching him expectantly pad back and forth following my friend as he transfers the Chinese takeaway that’s just arrived onto a plate can’t fail to make me smile. I find I’m watching Boris way more than he’s watching me. Maybe this is because I’m not food, but I think mostly because he already has a pet human and doesn’t need another.

After we’ve eaten my friend grabs my plate and heads to the kitchen for a glass of water. I pause the film (Johnny Depp – Black Mass – very good) and follow him to do the same. Now we’ve eaten, its time for our nightly ritual. Now we get to take our middle aged old fart medication.

My friend and I play illness top trumps. I have more pills than he does but his smaller number are for REAL men and put hairs on their chests.

He’s currently winning our game – much to my quiet disgust. Hopefully something dramatic but non life threatening will allow me to up the ante one day soon and prove once and for all I’m the Jedi master of being ill. For tonight however I concede defeat and curse my good health.

We head back to the living room and the film. Boris leaves his temporary dinner time banishment to the floor and hops up onto the sofa next to his master.

I know it shouldn’t but this makes me insanely jealous. I want a dog!

The universe also appears to be reminding me of this at every turn.

On a previous post where a colleague of mine, Ryan played my mom’s guitar, the very first advertisement that YouTube served me when I watched the video was for the dog’s trust…

I paid little heed to this, laughing with Ryan the next day about it at work. I mean – what were the odds? Maybe because I’d googled them when I was planning on getting a dog I was being presented with the most relevant ad for me?

They were in fact my first choice and are just down the road. Kenilworth has the largest dog’s trust in the UK, and seemed a really natural fit. I mean, how can you NOT get a dog that comes from a place called Kenilworth?!

Then yesterday I get home, expecting the usual fast food menus pushed through my letterbox, but noooooo… The universe isn’t prepared to let it slide when I ignore its Post It notes. 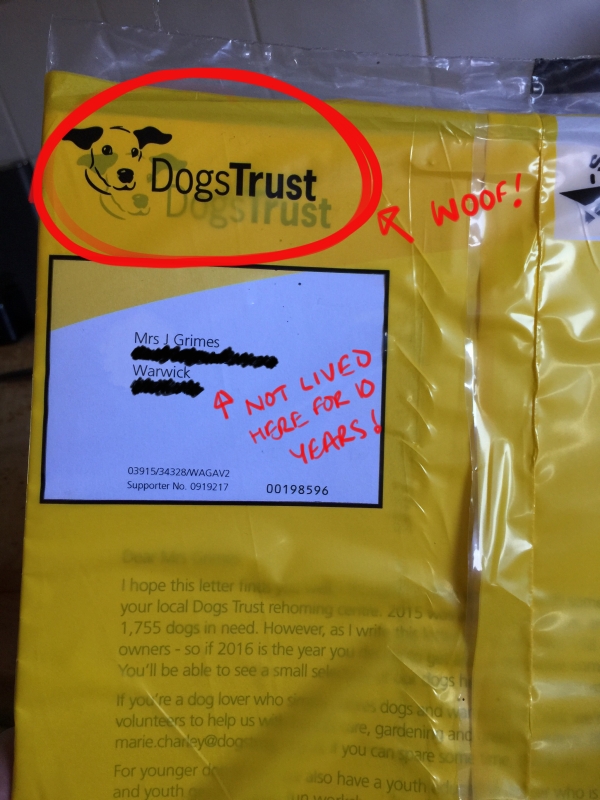 A lady that’s not lived here for 10 years receives a mail shot from THE DOGS TRUST and its sitting on my doormat!

The assault however is not over.

In order to remind me AGAIN the universe enlists the help of my sister in law who is a dog nut. She’s liking and sharing anything vaguely doggy on Facebook at the moment, and every time I load my page up I’m greeted with some kind of puppy or pooch looking impossibly cute.

As Boris and my friend get ready to leave, I’m jolted back into reality. Sadly I can’t get a dog at the moment, but one day in the near future I am sure I will. I’m not sure I’m going to throw it any dinner parties, but I might buy it a Dr Spock body warmer…

As Boris pads off into the night I find myself muttering

I’m sure he rolls his eyes at me.